My husband and I have been on a bit of a gluten-free kick lately.  Reducing our wheat intake really hasn’t been difficult; more inconvenient than anything but still not a big deal.  Gluten-free breads and are definitely an acquired taste for me and I had been quite frustrated lately with the pizza crusts we tried.  Some were tolerable and one in particular was like eating cardboard.

So, I wasn’t sure what to expect she I tried a mix for this recipe last night.  Turns out, it was pretty good.  My husband even commented that our dinner was “the best gluten-free pizza” we’ve had yet.

* For the crust, I used Bob’s Red Mill
* The gyro meat was Viana (vegan alternative)

2.  In a medium skillet over medium heat, melt the butter.  Add onions and green pepper, sautéing until crisp tender.  Add the gyro meat and toss until combined.  Sprinkle in a little steak seasoning, to taste.

3.  Place crust on a pizza stone and top with approximately 1c mozzarella.

4.  Add the gyro mixture and top with the remaining mozzarella.

5.  Bake approximately 15 minutes, or until crust is golden. 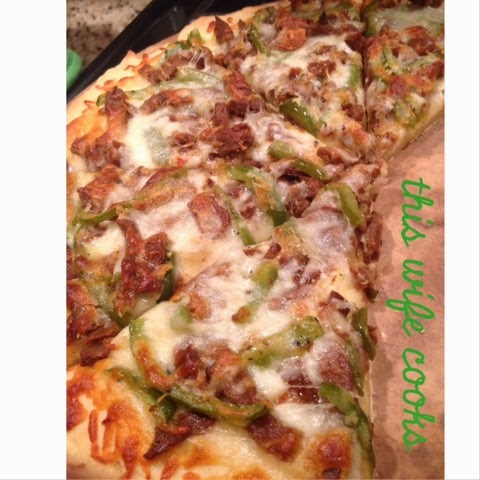 Welcome to This Wife Cooks!

Here you will find creative and flavorful plant-based recipes the whole family will love!